A Rodden Report - ANTIFA: What is it and how does it work

Why this is important.
ANTIFA AND HOME LAND SECURITY

The actions of Antifa groups have become so extreme that the Department of Homeland Security has allegedly labeled it “domestic terrorist violence,” according to “confidential law enforcement documents obtained by Politico.” THE DAILY WIRE Frank Camp


According to National Public Radio, "People who speak for the Antifa movement acknowledge they sometimes carry clubs and sticks," and their "approach is confrontational." CNN describes Antifa as "known for causing damage to property during protests." Scott Crow, described by CNN as "a longtime Antifa organizer," argues that destroying property is not a form of violence.
HOW THEY OPERATE

According to Dinesh D'Souza the Democrate Party is at the center of all this.
More about this. 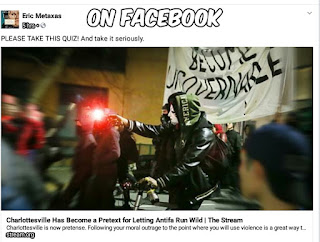 Rush Limbaugh said given the state of affairs in the country, particularly in the wake of last week’s events in Charlottesville, VA, it could be said the country was on the cusp of a second civil war.  Limbaugh insisted much of the angst was being driven by forces from the outside wanting to see the United States cease being a “super powerful nation.”
READ MORE HERE
at August 18, 2017